A complete blood count (CBC) is a blood panel requested by a doctor or other medical professional that gives information about the cells in a patient’s blood, such as the cell count for each blood cell type and the concentrations of hemoglobin. A scientist or lab technician performs the requested testing and provides the requesting medical professional with the results of the CBC.

Blood counts of various types have been used for clinical purposes since the nineteenth century. Automated equipment to carry out complete blood counts was developed in the 1950s and 1960s.[1] Most blood counts today include a CBC count (i.e.: complete blood count) and leukocyte differential count (LDC) that gives the percentage of each WBC type, such as neutrophils, eosinophils, basophils, monocytes, and lymphocytes).[2]

The cells that circulate in the bloodstream are generally divided into three types: white blood cells (leukocytes), red blood cells (erythrocytes), and platelets (thrombocytes). Abnormally high or low counts may indicate the presence of many forms of disease, and hence blood counts are among the most commonly performed blood tests in medicine, as they can provide an overview of a patient’s general health status. A CBC is routinely performed during annual physical examinations in some jurisdictions.

For patients who need blood transfusion, a blood count may be used to get data which would help plan an amount of treatment.[4] In such cases, the person should have only one blood count for the day, and the transfusion of red blood cells or platelets should be planned based on that.[4] Multiple blood draws and counts throughout the day are an excessive use of phlebotomy and can lead to unnecessary additional transfusions, and the extra unnecessary treatment would be outside of medical guidelines.[4]

A phlebotomist collects the sample through venipuncture, drawing the blood into a test tube containing an anticoagulant (EDTA, sometimes citrate) to stop it from clotting. The sample is then transported to a laboratory. Sometimes the sample is drawn off a finger prick using a Pasteur pipette for immediate processing by an automated counter.

Before the advent of automated hematology analyzers, CBCs were performed manually, by counting cells in a diluted sample of blood on a device called a hemocytometer, and by viewing a slide prepared with a sample of the patient’s blood (a blood film, or peripheral smear) under a microscope. However, manual blood cell counts are becoming less common, and instead this process is generally performed by the use of an automated analyzer.

Typically, analysis begins when a well mixed whole blood sample is placed on a rack in the analyzer. The instrument utilizes flow cells, photometers and apertures in order to analyze different elements in the blood. The cell counting component counts the numbers and types of different cells within the blood. A special photometer called a hemoglobinometer measures the amount of hemoglobin. This is done by adding a diluent that lyses the red blood cells which is then pumped into a spectro-photometric measuring cuvette. The change in color of the lysate equates to the hemoglobin content of the blood. This information can be very helpful to a physician who, for example, is trying to identify the cause of a patient’s anemia. The results are printed out or sent to a computer for review.

Blood cell counting occurs by flow cytometry when a very small amount of the specimen is aspirated, diluted and passes through an aperture and a laser flow cell. Sensors count and identify the number of cells passing through the aperture. The two main types sensors used are laser light detectors and electrical impedance. The instrument determines the type of blood cell by analyzing data about the size and aspects of light as they pass through the cells. Some instruments measuring different characteristics of the cells in order to categorize them.

Because an automated hematology cell counter samples and counts so many cells, the results are very precise. However, certain abnormal cells in the blood may not be identified correctly, requiring manual review of the instrument’s results and identification by other means (such as microscopy) of any abnormal cells the instrument could not categorize. Sophisticated modern analyzers can provide extended WBC differential counts, which include hematopoietic progenitor cells, immature granulocytes, and erythroblasts.[2]

Various Red blood cell indices (parameters calculated from other CBC results) are often reported in addition to cell counts and hemoglobin. Automated hematology analyzers calculate the average amount (MCH) and concentration (MCHC) of hemoglobinwithin each red blood cell. Average RBC size (MCV) and shape (RDW) are also calculated to provide additional diagnostic information. For example, if the red cells are smaller or larger than normal, or if there is a lot of variation in the size of the red cells, this data can help guide the direction of further testing and expedite the diagnostic process so patients can get the treatment they need quickly.[5]

Manual blood counts use a light microscope, usually with a specialized microscope slide, which is called a hemocytometer. 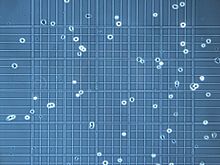 This shows the view through the microscope of the specialized hemocytometer slide. The built-in grid simplifies counting cells by helping the technician keep track of which cells have already been counted.

Hemocytometers (counting chambers that hold a specified volume of diluted blood to enable enumeration with a microscope) are used to calculate the number of red and white cells per litre of blood. (The dilution and scaled grid lines on the hemocytometer are used because there are far too many cells without those aids.)

Manual microscopic counting is useful in cases where automated analyzers cannot reliably count abnormal cells, such as those immature or atypical cells (that are not present in normal patients) and are only seen in peripheral blood with certain haematological conditions. Manual counting is subject to sampling error because so few cells are counted compared with automated analysis.

Medical technologists examine blood film via a microscope for some CBCs, not only to find abnormal white cells but also because variation in the shape of red cells is an important diagnostic tool. Although automated analysers give fast, reliable results regarding the number, average size, and variation in size of red blood cells, they do not identify specific shapes. Also, some normal patients’ platelets will clump in EDTA anticoagulated blood, which causes automatic analyses to give a falsely low platelet count. The person viewing the slide in these cases will see clumps of platelets and can estimate if there are low, normal, or high numbers of platelets.[6]

A complete blood count will normally include:

Total white blood cells are reported, and a differential reports all the white cell types as a percentage and as an absolute number per unit volume.[7] A high WBC may indicate an infection, leukemia or some other hematological disorder.

Basophils: May be increased in bone marrow related conditions such as leukemia or lymphoma.[8]

Total red blood cells: The number of red cells is given as an absolute number per litre.[7] Iron deficiency anemia is one condition that shows up as a Low RBC count.

Hematocrit or packed cell volume (PCV): This is the fraction of whole blood volume that consists of red blood cells.[7]

RBC Indices are typically calculated from other measured RBC parameters. They include the MHC, MCHC, MCV and RDW. Automated analyzers measure MCV directly, and use it and the RBC to calculate the Hematocrit.[5]

Mean corpuscular volume (MCV): the average volume of the red cells, measured in femtolitres.[7] Anemia is classified as microcytic or macrocytic if the MCV value is above or below the expected normal range; anemias are classified as normocytic if the MCV is within the expected range. Other conditions that can affect MCV include thalassemia, reticulocytosis, alcoholism, chemotherapy, vitamin B12 deficiency, and/or folic acid deficiency

Mean corpuscular hemoglobin concentration (MCHC): the average concentration of hemoglobin in red blood cells. In Hypochromic anemia, such as caused by an iron deficiency, the MCHC is decreased.

Red cell distribution width (RDW): reflects the degree of variation in size and shape of red blood cells as calculated by automated analyzers. RDW determination, in conjunction with RBC count and MCV, is useful in the interpretation of several hematological disorders. The RDW is measured as a coefficient of variation of red cell size distribution.

Platelet numbers are given, as well as information about their size and the range of sizes in the blood.[7]

Mean platelet volume (MPV): a measurement of the average size of platelets.

Certain disease states are defined by an absolute increase or decrease in the number of a particular type of cell in the bloodstream. For example:

Many disease states are heralded by changes in the blood count: leukocytosis can be a sign of infection; thrombocytopenia can result from drug toxicity; pancytopenia is generally referred to as the result of decreased production from the bone marrow, and is a common complication of cancer chemotherapy